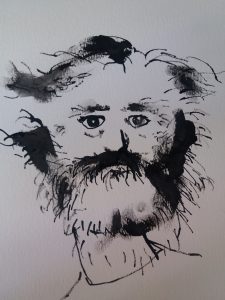 Rogelio Olmedo is an Aragonese sculptor. He trained between Zaragoza, Barcelona, ​​Mexico and Mallorca, where he has lived since 2006. He graduated in industrial design at the Escuela Massana (Barcelona, ​​1992). He made forging and sculpture courses in Jacint Nolla, Barcelona. He obtained the COPCA Scholarship, with which he traveled to Mexico. In 1995 he founded the forge of La Forja La Una, together with Raúl Sanz in Poleñino, the Monegros. He won the first Artesanía de Aragón prize in 1998 for Cama-Poema “Lugar”. He has developed works of applied sculpture, landscaping and prestigious projects of public sculpture: among others, the sculptures-trophy for Fundesa (Huesca, 2004); Megaliths for the Megalithic Museum (Huesca, 2004), external intervention of the Wind Museum (La Muela, 2003), Memorial to M. Giménez Abad (Jaca 02); “Twinning” in Grañén (Huesca, 1998).

In 2005, he moved to Mallorca where, together with his creative and periodic work, he developed samples of his work in local galleries, welding work on structures, and teaching the craft of iron. Participates in the Ca’n Dinsky Gallery in management and dissemination tasks and exposes in it up to three times. The professional jump took place 2005 knowing Mercedes Estarellas and beginning to work with Gerhard Braun Gallery of Palma, gallery in which he has presented the following exhibitions: “Rino please get out of those heels” 2015, “Abundances” 2016, and “600 Kilos, red heels” 2017.

Rogelio Olmedo extracts the impulse of life that dwells in each being, that instinct that gives us unsalvageable challenges with which we put our limited nature to the test. These iron animals concentrate the double condition of all physiology: a supreme potential energy that contradicts the brittle appearance of each member subjected to movement. To achieve the clayey appearance of the thin skin, covering a bone structure that suppurates nerve and expression, Rogelio first works the skeleton by sketching it as if it were a drawing, assembling small fragments of iron, then welding them with steel wire and gas. There is a trace of each phase of the process in the final work, which configures that chipped and membranous aspect that characterizes his work.